The Psychological Impacts of a Disaster 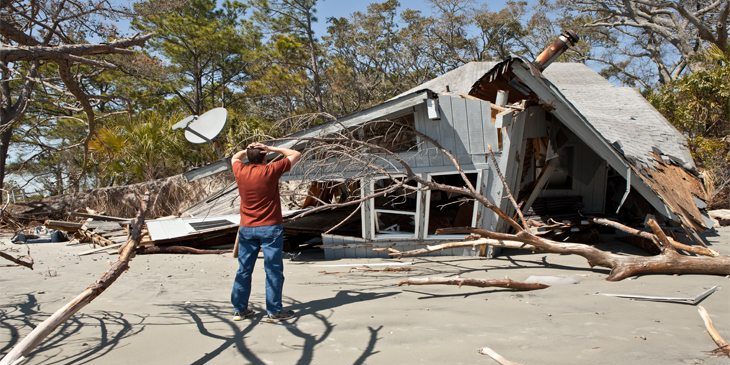 Immediately after the threat of the disaster has passed, relief services usually begin for the injured and a search for missing and dead commences. As the shock of the immediate disaster begins to wear off, it is replaced by a long-term shock in the victims as well as the rescuers of natural disasters. Once the rush of survival instincts begins to wane, the mental turmoil, anguish, and helplessness begin to overcome the victims as they see the remnants of homes, memories and their personal possessions devastated. For others in a natural disaster they are experiencing the grief of losing a loved one, neighbor or acquaintance which will manifest itself to a greater degree as time goes on.

When entire communities are destroyed by a natural disaster, there is a shared psychotic reaction to the loss of not only personal possessions, homes and memories but of their entire neighborhood or town. In the beginning group consolation can ease the initial shock as others rally to provide shelter, food, medical and physical assistance. Aid from outside of the disaster area brings a temporary relief to the psychological stress of the victims. By meeting the physical needs of victims, relief workers provide a momentary reprieve from the stress and anxiety that will later manifest itself in the form of psychological scars.

Phycologists are now being deployed with relief workers when a disaster occurs with the realization that the impact lives on long after the physical recovery and the belief that psychological services offered along with food and shelter is an important part of any recovery effort.

The Phases of Psychological Distress after a Disaster

• Shock – The initial shock of the event, whether flood, fire, hurricane, tornado or bomb is mental shock. Shock is a natural mental defense mechanism that exhibits itself in physical reactions. Shock as a medical condition is life threating. Shock alters the blood pressure, changes mental alertness, respiratory functions and alertness.

• Insecurity– When a disaster strikes at home or another familiar place, the feeling of security is shattered. In everyday life people have the expectation of safety in their home, at their school, or at their workplace. When a disaster strikes, these familiar safe havens are suddenly vulnerable places of danger. The feelings of safety are shattered when the home around you is destroyed. The insecurity felt after surviving a disaster could fester and cause anxiety that will lead to depression causing even more serve psychological damage

• Post-Traumatic Stress (PTSD) – Although this term was popularized by psychological counselors who were treating Viet Nam Veterans, it is now a recognized psychological condition that has origins in any extremely stressful situation. In the immediate aftermath of a disaster some may cope with the initial shock and move on to the rebuilding phrase as if nothing had happened. The manifestation of PTSD may occur weeks, months and even years later.

• Fear– Unreasonable fear is a common psychological abnormality for anyone who has survived a disaster. It is a disorder that is hard to diagnose and treat because it is triggered by different stimuli for assorted reasons. Even the disaster victim finds it hard to describe what exactly caused the feeling of fear which often leads to panic attacks.

Mental Health experts often see a multitude of unrelated psychological effects in disaster survivors including, generalized anxiety, extreme stress, extreme eating disorders, and other issues where the survivor is trying to control their environment before a disaster strikes again. The psychological impact of disasters is not limited to the victims and survivors of the event. Relief and Aid Workers also exhibit psychological symptoms from being among the devastation, injured, dead, homeless, grief stricken and shocked.

Relief and aid workers rush into the scene of a disaster to save the injured and help the victims, in so doing they are exposed to the horrors of the scene.  The horrific scenes that emergency workers witness while performing their rescue and recovery mission expose their psychological wellbeing to some of the same impacts as the victims of the actual disaster. The trauma that they witness, the helplessness, despair and grief weigh heavily on them as well. These workers can also develop mental health issues that include shock, anxiety, fear, depression, and PTSD. Although they may not have lived through the actual disaster by encountering those that have, they are reminded of their own vulnerability. They can relate to those that have been victimized and begin to dwell on their own safety and that of their loved ones. The same emotional and psychological traumas experienced by the victims are often diagnosed in the people who give aid.

Psychological Impact on the Community

In events that affect entire communities are devastated such as tornados in Oklahoma, wild fires in California, Floods in India, hurricanes in the Caribbean, the psychological effects are magnified. When there isn’t any immediate aid forthcoming, despair can become overwhelming. As everyone begins to feel the despair the whole community begins to feel hopeless, as they wait for aid and they can’t help each the despondence is replaced by anxiety beginning the trail of psychological breakdown that leads from shock to PTSD.

Disaster Relief Teams now have to include psychological counselors among their ranks so that not only the physically injured are treated but also those whose mental health has been affected can receive immediate treatment before they progress to harder to treat problems.