Music is more powerful than many people realize: Research has shown that it can improve memory, reduce stress, and even ease physical pain. For many people, music is inextricably linked with emotions—and it certainly affects their moods. If you’re feeling sad, angry, or unproductive, it’s only natural to turn on some tunes so you can cheer up, blow off steam, or add a spring to your step.

To get a deeper look at what types of music Americans listen to based on their moods, we surveyed over 1,400 people on the subject. What tunes do people prefer for different moods and situations? What music genre does each generation favor? How does music affect depression and anxiety? And what musical eras strike the strongest chord among listeners of various ages? Read on to find out.

From 1950s doo-wop to 1980s New Wave to the diverse hits of today, music has come a long way in the last several decades. The top music era among our respondents? The 1990s: a favorite decade for its distinctive R&B, nightclub music, hip-hop battles, and bubblegum pop, among others. The 1980s trailed closely, followed by the 2010s and the 2000s.

How does that break down among genre fans? R&B/soul lovers and alternative music fans both strongly favor the 1990s, while classical lovers prefer pre-1950s tunes. Hip-hop aficionados love the 2010, while fans of electronic music split their affections between the 1990s and the 2010s.

Looking at generations, people tend to prefer the music of their coming-of-age years: Younger millennials like 2010s tunes, while older millennials like 1990s and 2000s tunes. The Greatest Generation is one exception: While they naturally prefer 1950s tunes of their young adulthood, they also love the songs of the ’70s.

Top Tunes for Every Emotion

Different feelings and situations certainly call for certain songs and artists, according to our survey respondents. But some of the results are certainly surprising.

Take anger, for instance. People feeling rage turn to songs like “Break Stuff” by Limp Bizkit and “I Don’t F*** With You” by Big Sean. However, the top song is twangy country tune “Take This Job and Shove It,” signaling that for many of our respondents, rage may stem from situations at work.

In general, the favorite artist to help angry people blow off steam is Metallica. But there’s another surprise: Taylor Swift is the No. 2 artist of choice for pissed-off people—which may mean that while some want to channel their rage with heavy metal, others prefer upbeat tunes so they can shake it off. 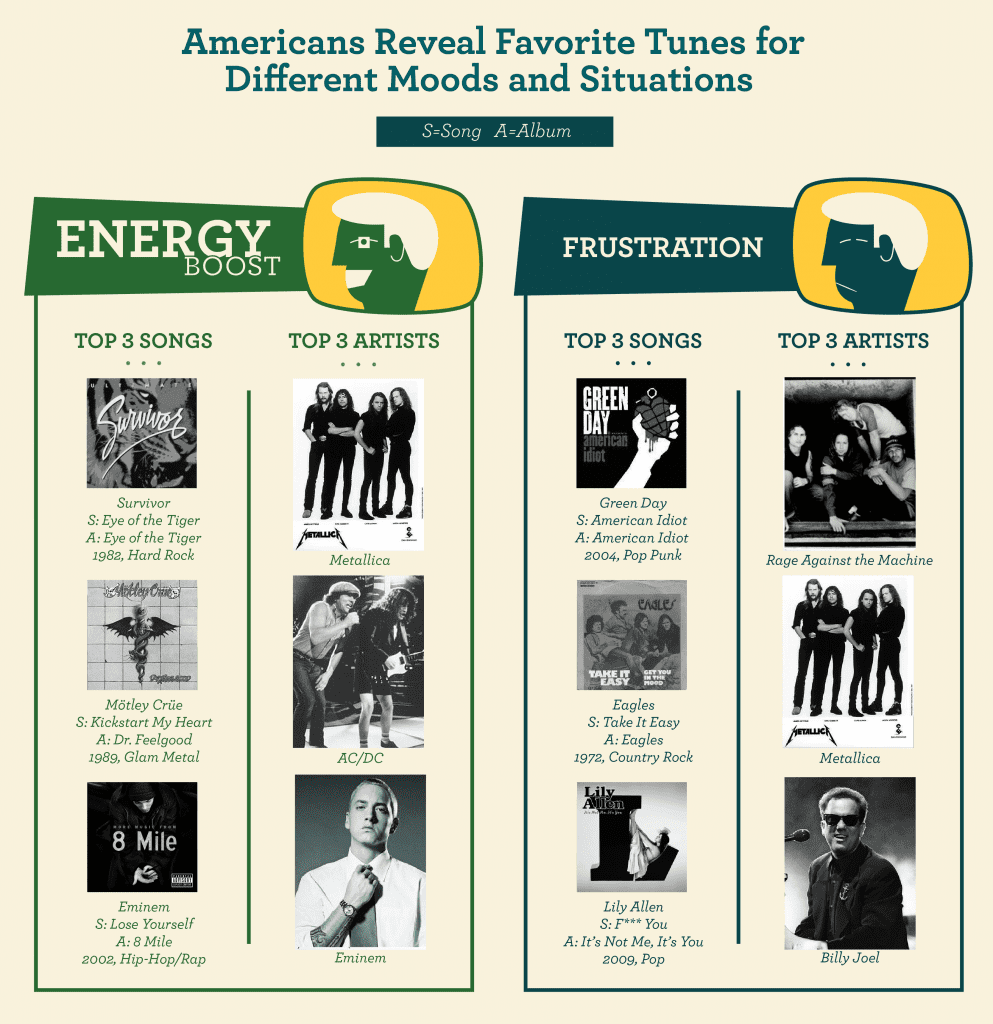 Frustration echoes anger: While Green Day’s “American Idiot” and Lily Allen’s “Fuck You” are among the favorite songs for this emotion, the second-place song is “Take It Easy” by the Eagles. 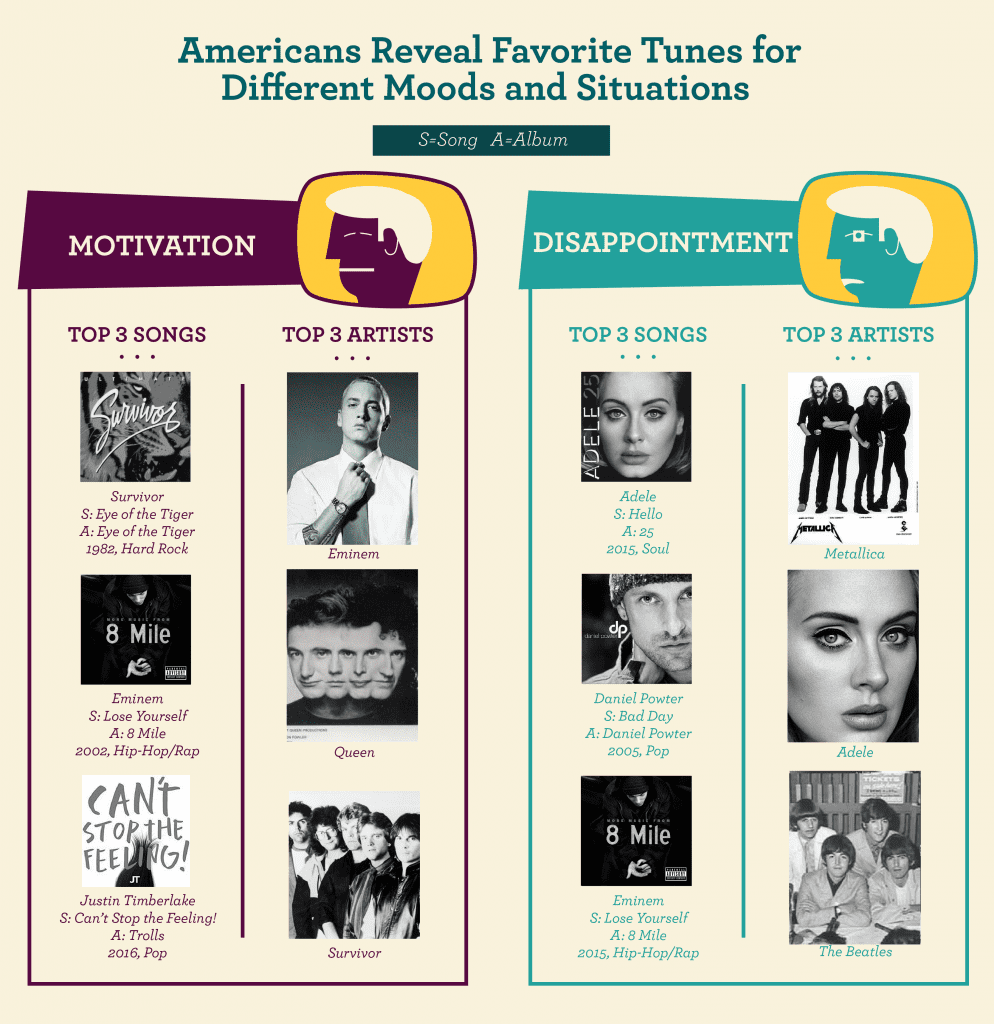 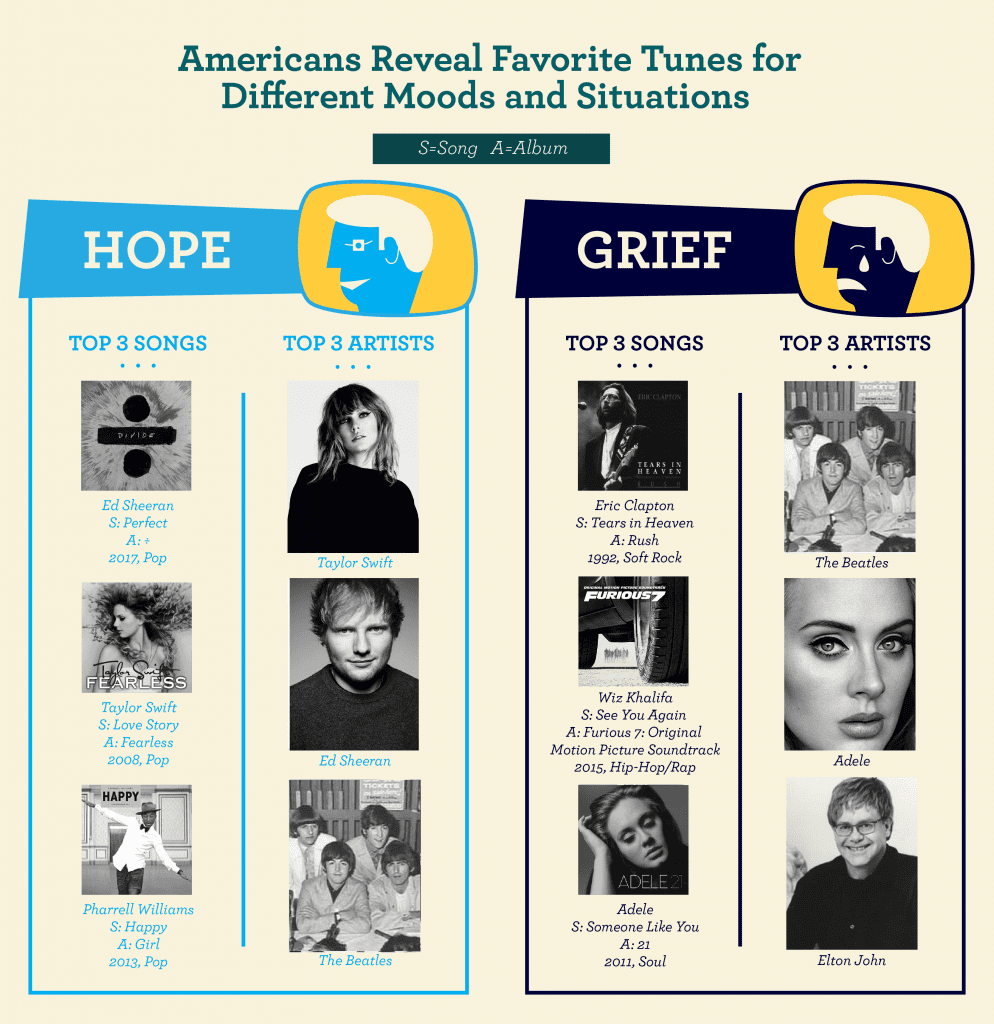 People feeling hopeful put on upbeat songs by Ed Sheeran, Taylor Swift, and Pharrell Williams (fittingly, “Happy”). They curb disappointment with “Hello” by Adele and “Bad Day” by Daniel Powter. For grieving listeners, the go-to tune is the mournful “Tears in Heaven” by Eric Clapton. Leaving on a trip? Our survey participants prefer an old classic: “On the Road Again” by Willie Nelson.

Top Genres for Every Generation 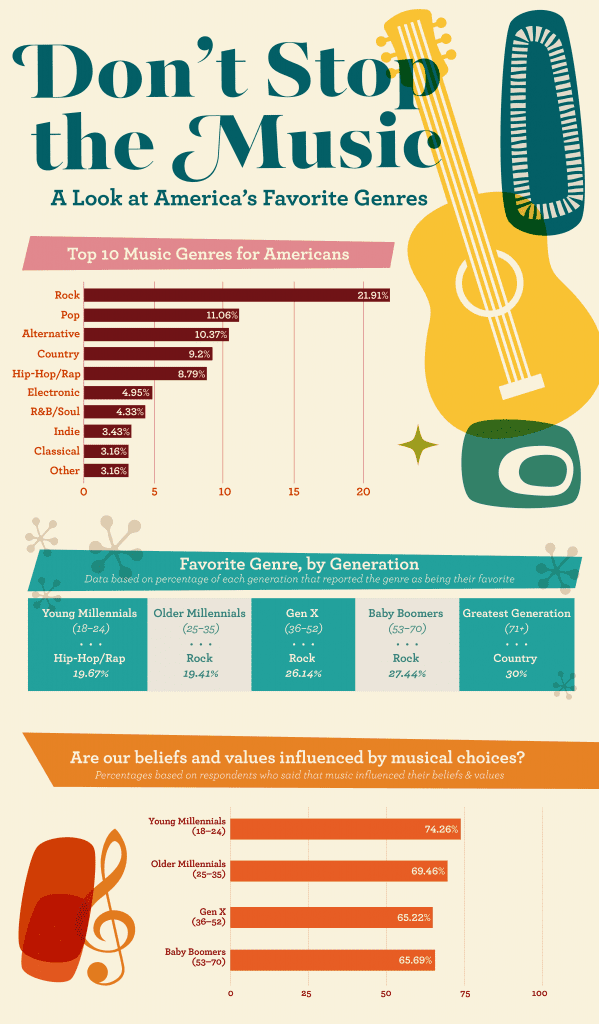 Everyone has different tastes, but according to our survey, more people prefer rock music to any other genre. In fact, it’s around twice as popular as the No. 2 genre pop and the third-favorite alternative.

Breaking down the generations, people from ages 25 to 70 tend to prefer rock music. On the other hand, while younger millennials (age 18 to 24) would rather rock out to hip-hop/rap.

Does music influence our beliefs and values? The majority of survey participants, across all generations, agreed that it does. Interestingly, the youngest generation (ages 18 to 24) was the most likely to feel that way. It’s possible music simply means more to this generation: According to one recent study, millennials listen to 75 percent more music than Baby Boomers. 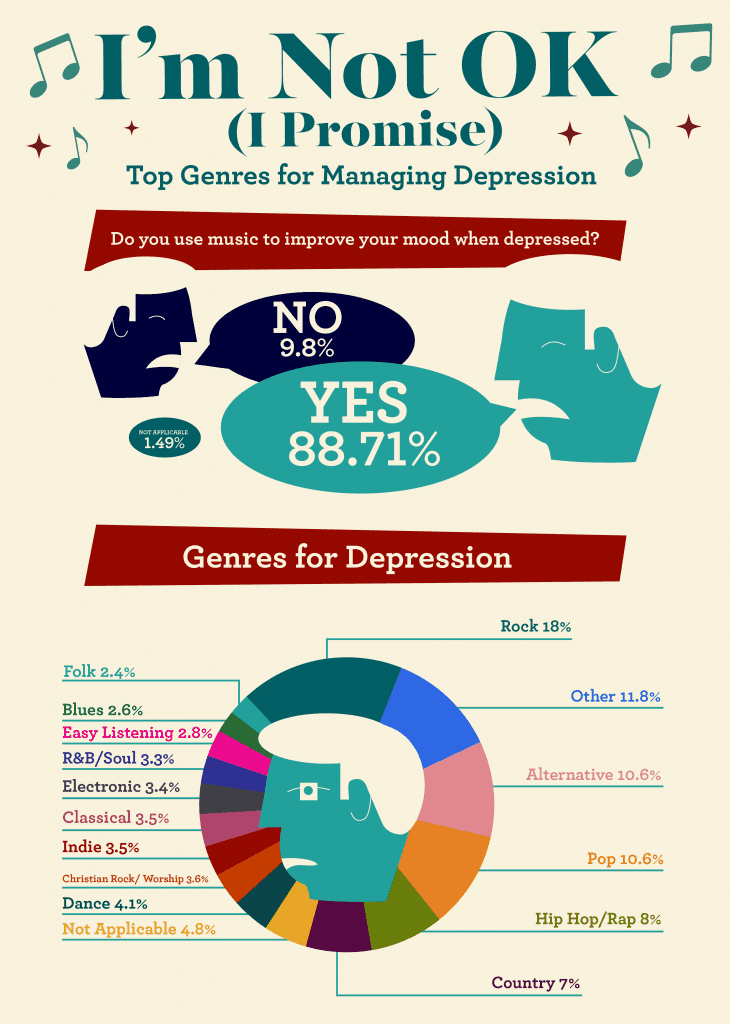 During any given year, depression affects approximately 5 to 8 percent of Americans. According to our survey participants, the vast majority—around 89 percent—turn to music in order to feel better. The top genre for depressed listeners is rock, followed closely by alternative, pop, and hip-hop/rap.

On the other end of the spectrum, blues is the least popular genre for people hoping to improve their moods. Easy listening, R&B/soul, electronic, and classical music are similarly unpopular. While some might find slow and melancholy music cathartic during times of unhappiness, it’s clear the majority of our respondents prefer to crank up songs with a strong beat. 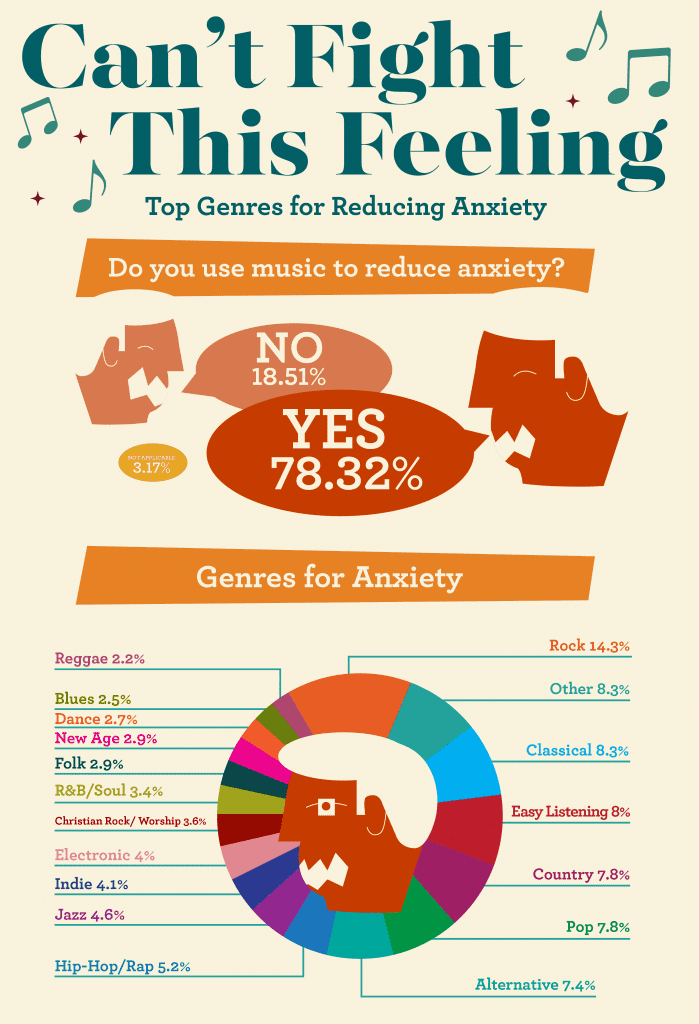 Like depression, anxiety is a common affliction among Americans. In the United States, anxiety disorders are the most prevalent mental illness. Approximately 18 percent of people experience anxiety during any given year. Again, the majority of our respondents—78 percent—turn on music to help curb feelings of anxiety.

Rock is the top choice, but then a couple of surprises emerge: The No. 2 genre people prefer to ease anxiety is classical music, followed closely by easy listening, country, and pop. According to research, certain types of music can reduce a listener’s blood pressure, slow their heart rate, and even decrease their levels of cortisol (the stress hormone). One song in particular—“Weightless” by Marconi Union—was found to reduce listeners’ stress levels by a whopping 65 percent. 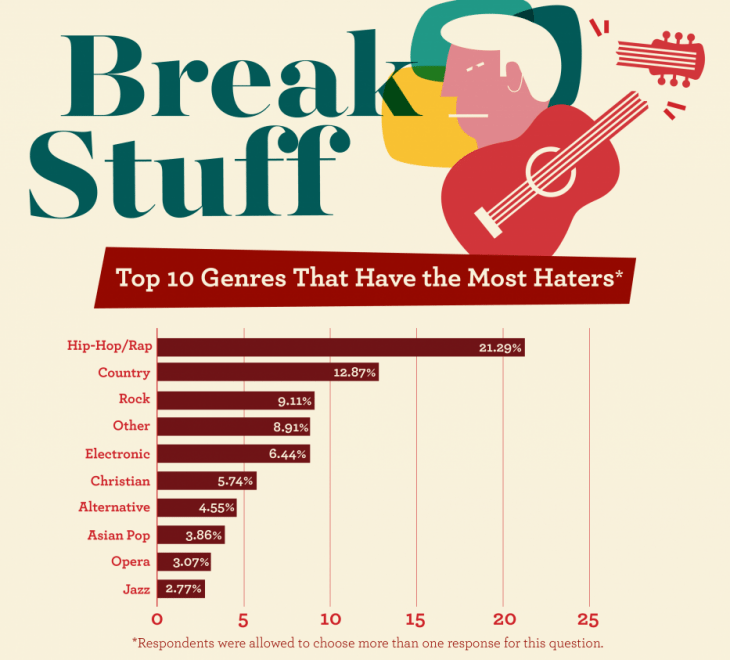 What types of music to people actively dislike? Opinions vary, ranging from redneck rock to emo. But according to our survey, the genre that’s racked up the most haters is hip-hop/rap, with a surprising 22 percent of our participants counting themselves among those haters. Country is also relatively unpopular: 13 percent of our respondents don’t like it.

Why the hate? Criticisms of these genres range from “I don’t think it’s really music” (regarding hip-hop/rap) to “Twangy guitars and warbling vocals don’t really do it for me” (referring to country).

Music Genres That Cause Sadness 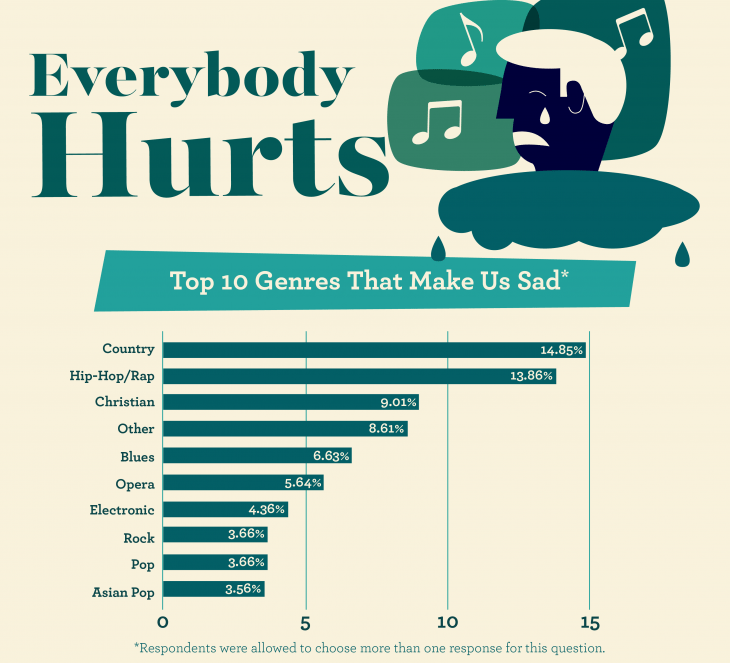 There’s an old joke about country music: If you play the songs backward, you get your spouse back, you get your job back, and your dog comes home. There’s no denying country music has its share of tearjerkers, and nearly 15 percent of our respondents reveal these tunes make them sad.

Hip-hop/rap ranks similarly high on the sadness scale, likely due to the emotional subject matter. After all, many of the lyrics chronicle the difficulties of urban life and the struggles faced by people of color. Christian music is the third-saddest genre, with many songs featuring stories of death, illness, regrets, and goodbyes.

Music is powerful, and people listen to it for a variety of reasons: to combat boredom, to reminisce, and, indeed, to enhance their moods. As our survey reveals, many people make thoughtful choices when selecting a song, artist, or genre, tailoring their soundtrack to suit certain moods and situations.

If you or someone you love is dealing with a mental health disorder such as anxiety or depression, music can certainly help. But your favorite songs are no substitute for assistance from a caring professional. The Family Center For Recovery is the only facility in Florida owned and operated by a triple board certified addiction psychiatrist. If you’d like to talk to someone who can help, contact us today. Your call is free and confidential.

We surveyed 1,455 Americans on their music preferences. We employed a non-randomized convenience sampling methodology for recruitment of participants via Amazon’s Mechanical Turk service. Demographic variables reported include ages ranging from 18 to 71, with 42.24% self-identified males and 57.55% self-identified females. 0.21% self-reported as being “other.”  All participants were residents of the U.S., representing all states and the District of Columbia except for: Alaska, Delaware, Idaho, Montana, North Dakota, Vermont, West Virginia, and Wyoming.

When asking about the best songs for specific emotions and situations, we asked situational questions and had our respondents enter their favorite song for the occasion in the format: “Artist – Song Title.” We then cleaned that free response data and ranked the songs and artists based on the highest number of responses with those songs.

Psychiatrist Calls for Caution with the use of Medicinal Cannabis in Minors
January 29, 2019
It’s 5 o’Clock Somewhere: A Look at American “Day Drinking” Culture
May 22, 2018
Puff, Puff, Pass it to my Dog: The Effects of Substances on Our Beloved Furry Family Members
April 11, 2018