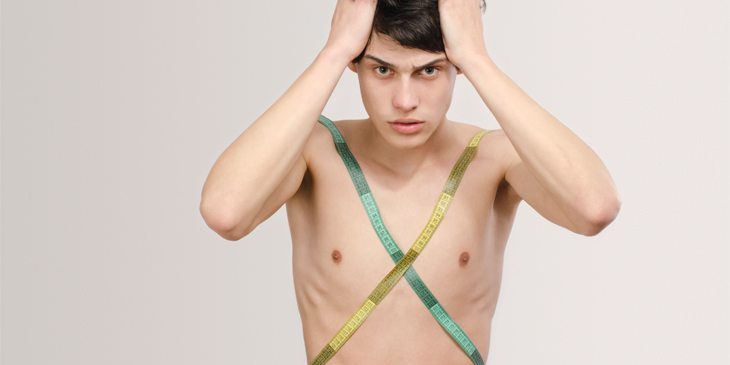 In the past, it was fairly common to come across teenage girls with eating disorders and as a result, body image was often discussed with young women, whereas teenage boys were seldom considered in these types of situations and the dialogue was seldom opened with them. Research has recently shown than more than a quarter of teenagers who suffer from eating disorders are male. There are some reasons that are common between the two genders when it comes to attempting to manipulate their bodies to look ‘better’ but there are also a number of deviations. While teenage girls generally are trying to be thin and their eating disorders tend to be due to trying to achieve weight loss, for boys, this often center around trying to be lean and muscular while appearing bigger and stronger. This can also lead to abuse of illegal substances as well as a risk of depression if they are not able to attain the physique they are after.

What is an eating disorder?

An eating disorder is characterized by an unhealthy relationship with food. This can take the form of eating too little, obsessing over what is eaten or what is available to eat, irregular eating habits, eating excessive amounts of food, often followed by purging and being concerned about body size and shape to a higher than normal level. It can also be characterized by extensive exercise, pushing the body past its limits on minimal sustenance. The best known eating disorders are Bulimia Nervosa and Anorexia Nervosa as well as Binge Eating disorder, although there are many others. This is a medical condition which affects the mind and emotions as well as the body. Eating disorders can also be brought on by biological factors such as hormone issues, nutritional deficiencies and even genetics. Some of the psychological issues that cause eating disorders can come from a low self-esteem and poor body image.  Other factors can include peer pressure, dysfunctional family relationships, negative life experiences or abuse and even taking part in certain sports that demand a certain physique such as ballet, diving, gymnastics and wrestling.

Symptoms of an eating disorder

•  Has minimal energy and is constantly tired

•  Swelling on cheeks and jaw line

•  Calluses on fingers from inducing vomiting

•  Lack of attention, not able to focus for long

•  Blood cell counts may be off

•  Skin, nails and hair may become dry and brittle

•  Mottled look to hands and feet

•  Constantly complains about being ‘fat’ or ‘overweight’

•  Denies being hungry quite often

•  Prefers not to eat around other people

•  Food obsession may involve cooking intricate meals but not eating them

•  Skips meals or refuses to eat at the table

•  Takes meals to the bedroom or other rooms

•  Leaves the table soon after eating, often going to the bathroom

•  Hoards food in unusual places (such as under the bed)

•  May switch between starvation and binge eating

•  Exercises excessively, even in poor weather

•  May start lifting weights or trying other forms of bodybuilding

•  Stops hanging out with the usual social group

•  May show evidence of steroid use

•  Checks in the mirror often

•  Either avoids a scale or weighs himself excessively

Eating disorders can result in death if not treated. This is a serious condition which can have a lifelong effect on the body. It is very important to consult with professionals when dealing with this illness, even if it is only suspected and not yet confirmed. The earlier treatment is received, the more likely it is that recovery will be faster and more likely to be effective. Our center offers a full continuum of care for eating disorders. Please call admissions for more information for yourself or a loved one.

Most treatments will involve counseling or psychotherapy. In some cases, medication will also be prescribed to assist in healing from the illness. Treatment is usually decided on a case for case basis as not all individuals are the same. Treatment will involve taking care of the physical symptoms as a result of the illness as well as working on preventing the illness from taking hold again in the future. Nutrition is discussed and healthy alternatives presented. Therapy is often done on an outpatient basis. This may involve one on one sessions or group counseling. If the eating disorder has got to the point of being life threatening, in-patient treatment may become necessary. This will involve treatment of the symptoms and stabilizing the teenager first, which later psychological treatment.  This treatment can be long term in some cases. It is important that the child has a physician that they can trust and perhaps open up to when discussing their eating disorders and the reasons for them.

Monitoring is necessary even after the person appears to have recovered from an eating disorder. Consultation with a nutritionist may be essential to ensure that damage done to the body is restored by eating a balanced diet at regular intervals. A nutritionist may also be able to help the child develop a healthier relationship with food.