Whether it’s a branded holiday like Memorial Day or the Fourth of July, a celebratory outing, or just a Sunday brunch, it seems like we’re always looking for an opportunity to toast with something a little stronger than our standard fare.

But if you’ve caught yourself drinking a little more than usual lately, you’re probably not alone. Alcohol is starting to weave itself into American culture in some aspects, and the impact is startling. In 2017, the journal of JAMA Psychiatry published a report that analyzed the drinking habits of men and women across the county. According to their analysis, the number of people engaging in high-risk drinking increased by 30 percent between 2001-2002 and 2012-2013.

Consumption habits in America are changing, and that might include when it’s OK to start drinking in the first place. To learn more, we surveyed over 1,000 people to understand what times of day it’s OK to drink, whether daytime and weekday drinking is still considered taboo, and how much those mimosas and mixed drinks are costing us on a regular basis. Want an inside look at what could be encouraging us to drink more during the day? Read on to see what we uncovered.

Even though our bodies process alcohol the same way whether we’re drinking during the day or at night, there’s still something different about having a drink (or two) while the sun is still shining. “Daytime drinking,” during what’s typically seen as more productive hours, carries a certain connotation about the way a person might be drinking too much or drinking at the wrong time of day. At least, it did in the past.

Most of our survey participants agreed that drinking during the very early morning hours, between 6 a.m. and 8 a.m. for instance, or slightly later between 8 a.m. and 10 a.m, is still considered too early to be a socially acceptable time for drinking. It gets a little hazy after that, though.

Up until 12 p.m. most Americans agreed it was too early to be thinking about booze. But once lunchtime hits, all bets are off. Fewer than 1 in 4 people suggested between noon and 2 p.m. is too early to drinking, followed by even fewer (under 16 percent) who felt 2 p.m. to 4 p.m. is a bad time for drinking.

What about your first glass of beer, wine, or mixed beverages? Nearly 1 in 3 Americans voted the hours between 2 p.m. and 4 p.m. as prime drinking times, followed by more than 23 percent who felt waiting until 6 p.m. to 8 p.m. is more acceptable. For others, an earlier drink might be better: Nearly 7 percent said drinking between 10 a.m. and 12 p.m. is OK, followed by almost 18 percent who voted for have their first alcohol beverage between 12 p.m. and 2 p.m.

Whether early-morning alcoholic beverages or substance use (like marijuana), we found millennials were more likely to partake in these sunrise sessions.

Based on our survey, we found more than 1 in 5 millennials believe waking up on a weekday and using cannabis or waking up and drinking an alcoholic beverage is socially acceptable, followed by 2 in 5 who believe these actions are admissible on weekends.

Even in moderation, the reality is consistent alcohol consumption can be having a more damaging effect on the body than most people realize. One commonly held belief is that drinking a glass of wine every day can be good for the heart. In reality, more recent studies suggest the research showing positive or neutral effects to even a single drink may be flawed (and biased).

Compared with millennials, older generations displayed less favorable opinions toward substance use (including alcohol and marijuana) immediately after waking up. More than 62 percent of Gen X Americans and 75 percent of baby boomers said neither was acceptable during the week. 34 percent of Gen Xers said the same for weekends, followed by more than 61 percent of boomers. 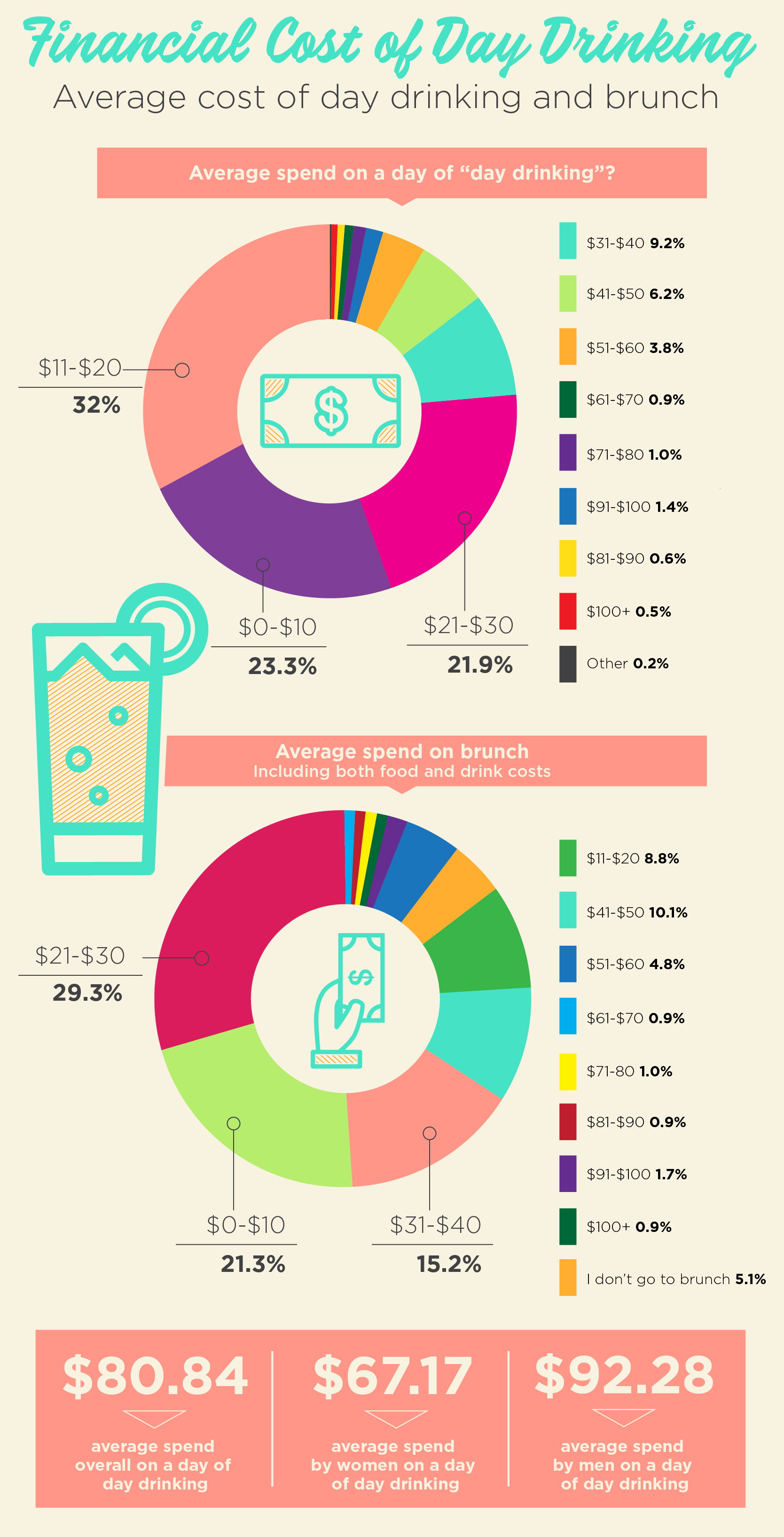 As it turns out, drinking can be a very expensive pastime for most adults. Particularly if you’re drinking at bars or restaurants, the drink you’re ordering probably comes with a pretty severe markup. At some establishments you could be paying 25 to 50 percent (or more) over what it would cost you to make those drinks yourself—adding up to a hangover for your wallet too.

Planning to go out for an afternoon of “day drinking”? While roughly 32 percent of people spend between $11 and $20 on the experience, another 21 percent spend between $21 and $30, and nearly 1 in 10 spend between $31 and $40. And if you’re planning on knocking back a few mimosas or Bloody Marys at brunch, expect to spend even more: More than 1 in 10 people shell out between $41 and $50 on brunch after factoring in their alcoholic beverages. 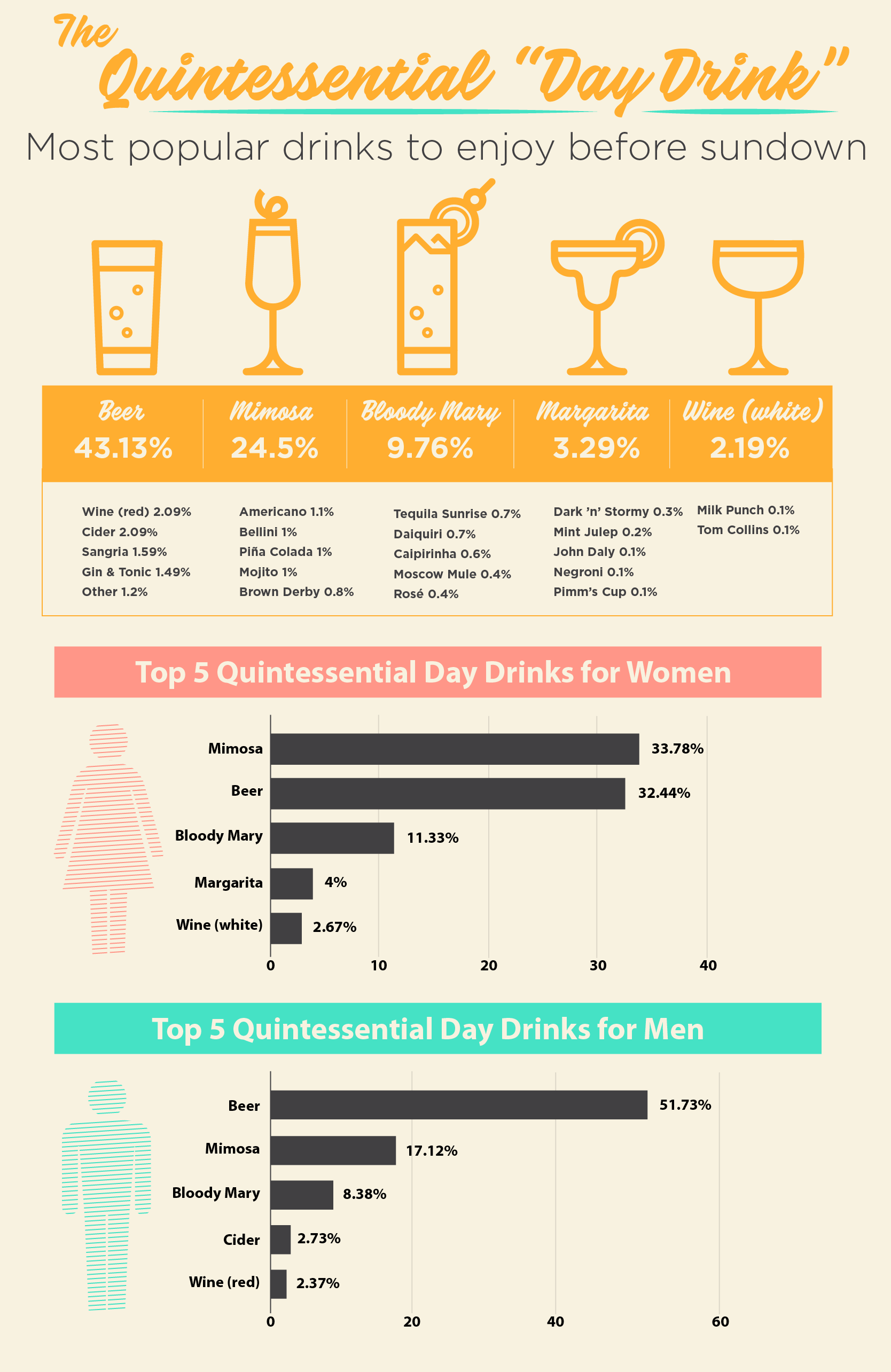 When it comes to high-risk alcohol consumption, beer typically has the lowest alcohol content on the menu. A person could technically have more beer per sitting than some other beverages (such as malt liquor, wine, or spirits) and remain below “at-risk” levels of inebriation.

But beer can still have a negative impact on the body, causing both physical and mental harm when consumed irresponsibly. Research shows drinking beer over longer periods of time is more likely to lead to alcohol dependency, memory loss, liver failure, heart problems, and more.

Still, when it comes to day drinking, more than 2 in 5 Americans picked beer as their beverage of choice. It’s more popular among men than women. We found more than half of men preferred to drink beer during the daytime hours than they did typical brunch drinks like mimosas or Bloody Marys. On the other hand, more than 1 in 3 women preferred mimosas as their go-to drink during daytime hours, followed by beer (32 percent), Bloody Marys (11 percent), and margaritas (4 percent).

Posting Under the Influence 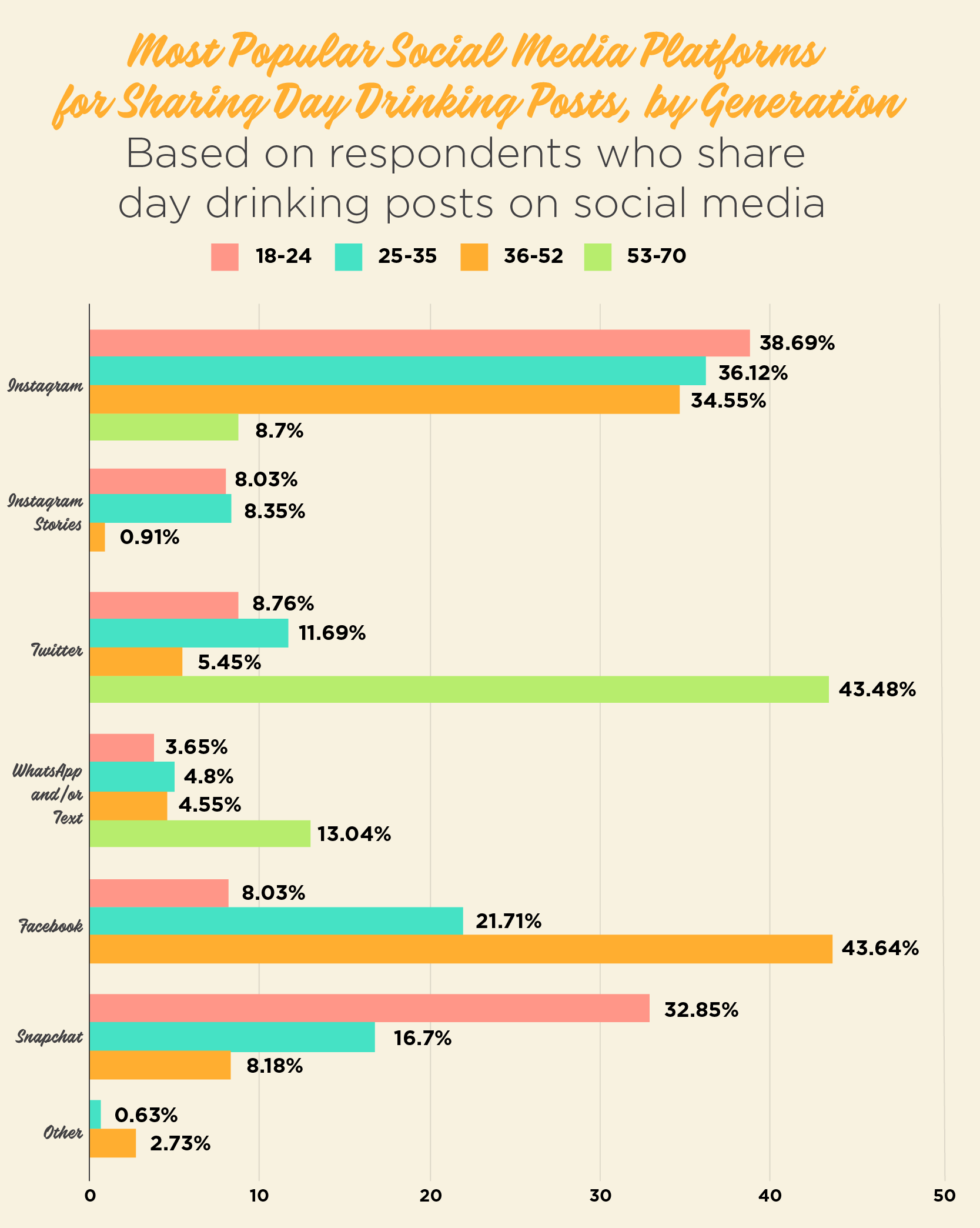 Sometimes it isn’t enough to have a few drinks in the middle of the day—you may want to post about it on social media too. These digital reminders of a boozy afternoon spent sipping beer or prosecco aren’t just popular among millennials, either. While nearly 39 percent of respondents between the ages of 18 and 24 said they shared their daytime drinking escapades on Instagram, 36 percent of people between 25 and 35 as well as 34 percent between the ages of 36 and 52 said the same. Millennials went even one step further and shared their booze-filled experiences on Instagram stories.

Generation X Americans might have been willing to share their drinking habits on Instagram along with young generations, but we found nearly 44 percent preferred using Facebook. And don’t think baby boomers are just as guilty: Almost 44 percent of men and women between the ages of 53 and 70 admitted to using Twitter to share their daytime drinking photos with the world.

More than four in five Americans today are engaged in various forms of social media, and apps like Instagram, Facebook, and Twitter are changing more than the ways we communicate or interact with each other. One study found Instagram influences roughly 75 percent of our purchase decisions today, and other research points to the potentially harmful effects of social media on developing minds.

One aspect of concern is in peer influence. Experts suggest social media users (especially teenagers and young adults) are more likely to engage with content they perceive as being popular, even if it depicts risky behavior, including cigarettes or alcohol. According to our survey, more than 45 percent of people admitted to feeling left out when they saw posts about day drinking in their social media feeds, and more than 37 percent said it made them feel like they should be drinking too.

Does It Make a Difference? 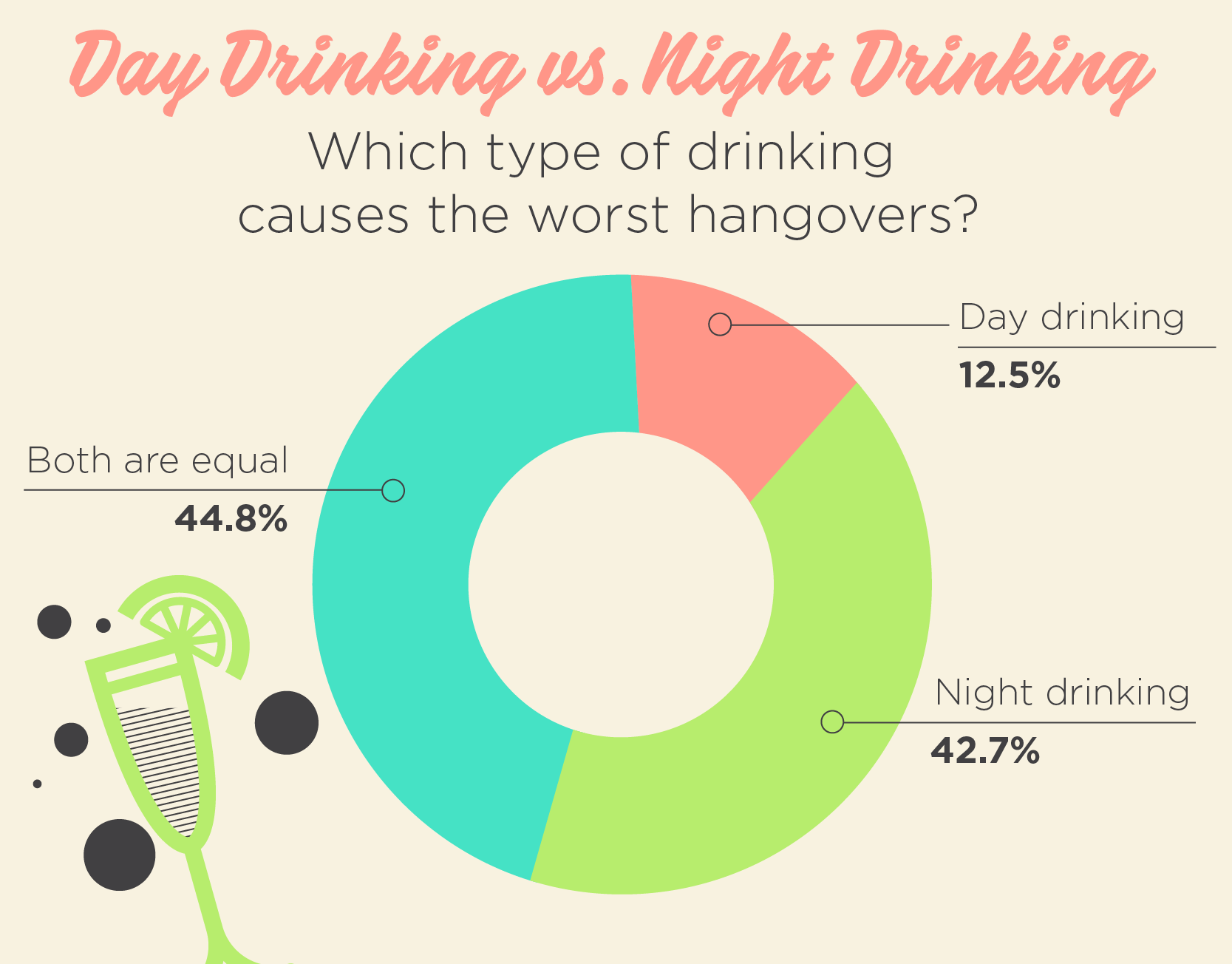 No matter what time of day it is, if you drink too much, your body is going to tell you. Typically marked by headaches, nausea, fatigue, and a sensitivity to light, hangovers are a clear indicator that you drank too much the night (or day) before. You may have your method for how to deal with these effects, but the most effective ways to approach a hangover is with rest and rehydration.

Research has shown drinking during the day versus at night doesn’t directly impact the body in different ways, but that doesn’t stop people from feeling the effects of their alcohol differently. While nearly 45 percent of men and women said they felt the effects of drinking equally regardless of the time, we found close to 43 percent said night drinking gave them worse hangovers compared with daytime indulgences.

Whether it was due to one too many mimosas or the need to stay awake after having too much to drink, roughly 13 percent of people said their day drinking hangovers were the worst of all.

Whether it’s at brunch on the weekends or even an afternoon “treat,” the reality is daytime drinking has become more socially acceptable today than it may have been in years past. Social media may be playing a role in the normalization of daytime drinking, creating a sense of fear that people not participating may be missing out on something fun. But consuming alcoholic beverages in excess can have serious repercussions. And for some people, day drinking may even lead to worse hangovers than consuming alcohol at night.

If you or someone you love can’t make it through the day without a drink, help is here for you. At the Family Center for Recovery, our mission is to provide a full continuum of care from residential treatment to intensive outpatient programs and transitional living. The Family Center for Recovery is the only facility in Florida owned and operated by a triple board-certified psychiatrist to provide expert mental health care to you or your loved one throughout the recovery process. You are not alone. Visit us online today at FCFRMD.com to learn about the levels of care we provide on your road to recovery.

All participants were screened using a two-pronged approach: (1) description of selection criteria with a requirement for self-acknowledgement and acceptance, and (2) directly asking each participant to confirm each criterion, namely being a drinker of alcoholic beverages. This study employed an online survey using a convenience sampling methodology via Amazon’s Mechanical Turk, with a subsequent posteriori exploratory, correlational data analysis methodology employed after completion of data scrubbing via Microsoft Excel and data visualization via Tableau.

Demographics: We surveyed 1,044 participants. Participants ages ranged from 18 to 75 years. Gender comprised of 44.88% female, 54.63% male, and 0.49% other (other included those who self-identify as transgender, gender non-conforming, two spirit, and agender), and sexual orientation was self-reported as 88.20% Straight/Heterosexual, 8.20% Bisexual, 2.62% Gay, 2.83%, and 0.78% Other. All participants self reported as drinkers of alcohol, as defined in the aforementioned methodology.

Psychiatrist Calls for Caution with the use of Medicinal Cannabis in Minors
January 29, 2019
Puff, Puff, Pass it to my Dog: The Effects of Substances on Our Beloved Furry Family Members
April 11, 2018
Good Vibrations: A Look at American Moods & Music Choices
April 11, 2018