Puff, Puff, Pass it to my Dog: The Effects of Substances on Our Beloved Furry Family Members

A rapid heart rate, elevated blood pressure, vomiting, and changes in behavior are all just a few of the short-term effects of a small amount of cocaine use. While these signs may be easy to spot in a human, they may be less obvious if your dog or other pet has accidentally consumed some of the same substance.

These aren’t the only impacts on animals though. Just as with people, higher levels of consumption or delayed treatment can lead to serious side effects, including seizures or even death. And for drugs that are strong enough (like fentanyl, which is up to 50 times stronger than heroin), even those four-legged friends trained to sniff out these substances could die by simply coming into contact with an area that’s been contaminated (as opposed to ingesting them directly).

To learn more, we surveyed over 1,000 people on the types of substances they have experienced being ingested by their pets – from cats and dogs to birds and rabbits. We explored the vast array of toxic substances our pets can get into, where they found them, and how to proceed if you ever see some of these common symptoms. Read on as we discover how many people are potentially feeding their pets these drugs for sport – and why. 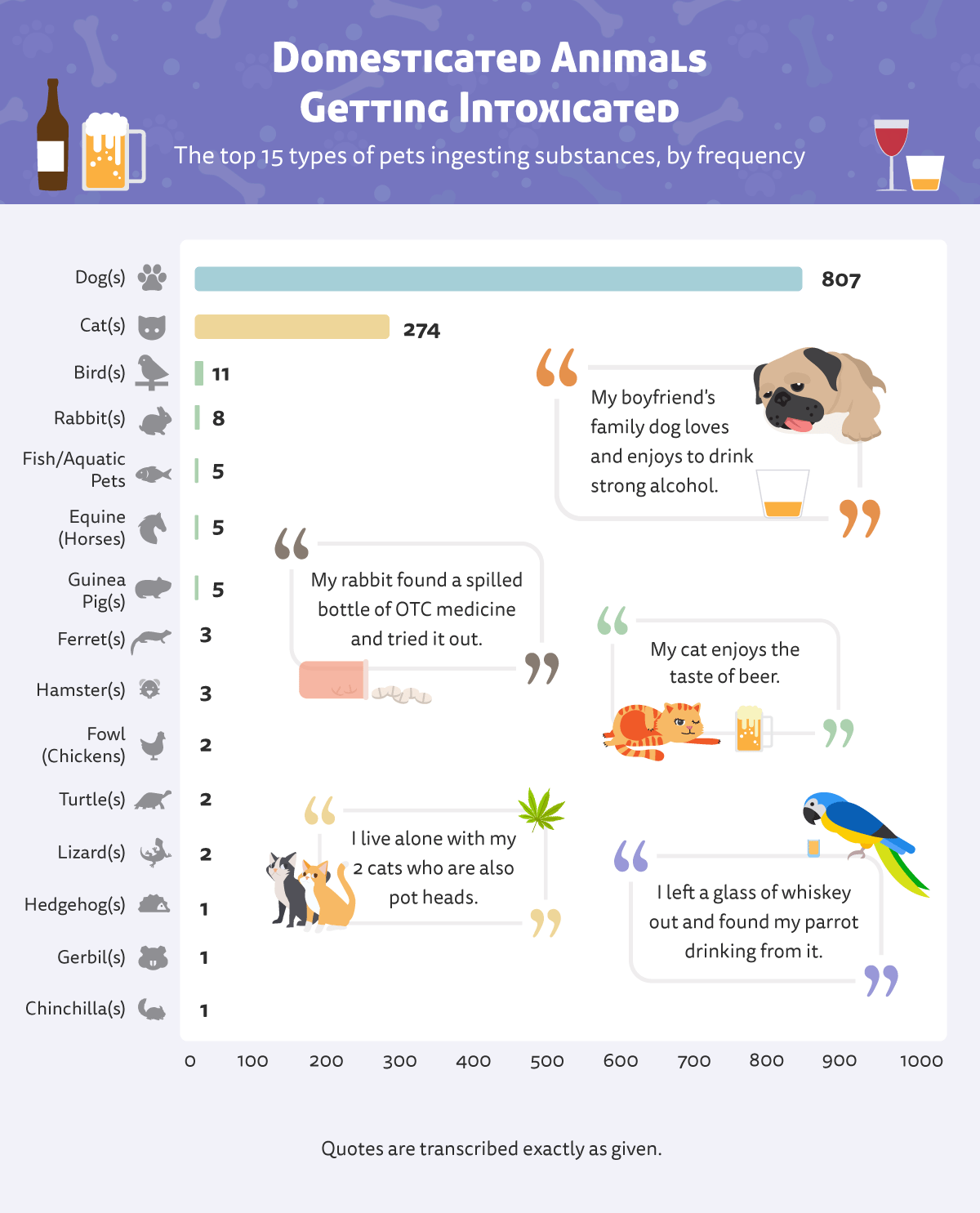 Of the more than 1,000 people we polled who have witnessed an animal ingesting or inhaling drugs at least once, we found 807 experienced this with dogs – more than three times as many as with any other pet.

There are some basic human foods you may already know dogs shouldn’t eat like chocolate or caffeine, but the list of human foods (or beverages) that could potentially be lethal to man’s best friend is much longer than that. Fruits and vegetables like onions, garlic, and grapes can lead to blood cell damage or kidney failure. While researchers are still unsure why, even just one raisin can be severely toxic to dogs.

Also among these substances is alcohol. Significantly more toxic to pets than to humans, even the smallest bit of alcohol in dogs can lead to vomiting, diarrhea, difficulty breathing, and even death. Dogs aren’t alone. Many of these same foods (including alcohol) have the same effects on cats.

As we found, more than 270 of the Americans we surveyed reported watching cats ingest or inhale dangerous substances. Fewer people experienced this with birds, rabbits, and fish.

Nearly 280 of the 1,083 people we polled recounted watching their pets ingest some form of alcoholic beverage. If the idea of watching your dog get tipsy (or even drunk) on alcohol sounds cute at first, consider this: Beyond the dangers real-life alcohol consumption poses to your pets, it could earn you animal cruelty charges.

While some people we polled confessed to feeding their dogs beer or wine on purpose to see what might happen, even responsible pet owners should be cautious of the impact accidental ingestion can have. Leaving leftover alcoholic drinks lying around your house, or even in what might seem like hard-to-reach places, can have dire consequences.

The same is true of over-the-counter medication. Pets can be naturally inquisitive by nature, and leaving medicine like pain relievers or birth control pills out on your table or counter could entice a curious cat or dog to sample them. More than 200 pet owners admitted watching their pets consume these medications, followed by marijuana edibles (217), a marijuana contact high (205), and marijuana leaves directly (148).

More than half of Americans recognized that none of these substances was actually safe for their pets, but others weren’t as sure. Roughly 1 in 4 suggested various forms of marijuana consumption (including a contact high) were safe, while in reality the risk of poisoning from even small amounts of marijuana can be very serious for cats and dogs. 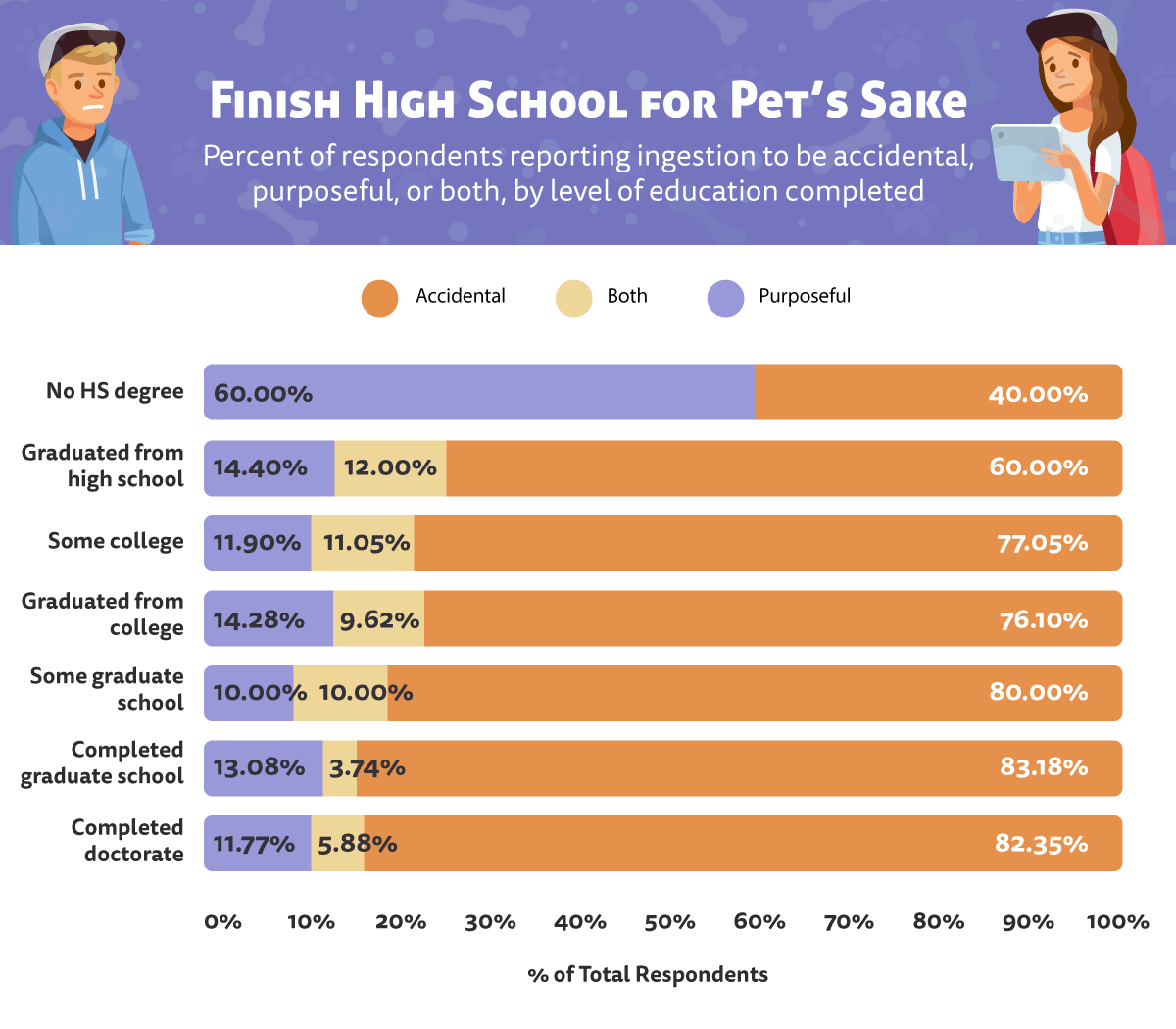 Sadly, some of the people we polled admitted to deliberately feeding their pets substances including alcohol, marijuana, and different types of medication. As one person told us, “My cat enjoys the taste of beer.” Another said, “I live alone with my cats who are also pot heads.”

According to our survey results, this type of substance-related animal abuse was more common among people with lower levels of completed education. Of those without a high school degree who had seen their pet ingesting potentially toxic substances, 3 in 5 purposefully fed those substances to the animal in question.

Those numbers decreased significantly among those with higher levels of completed education. Fewer than 15 percent of people who graduated from high school fed these harmful substances to their pets deliberately, and fewer than 12 percent with some college experience said the same. We found nearly as many with a graduate or doctoral degree also confessed to the same behavior. 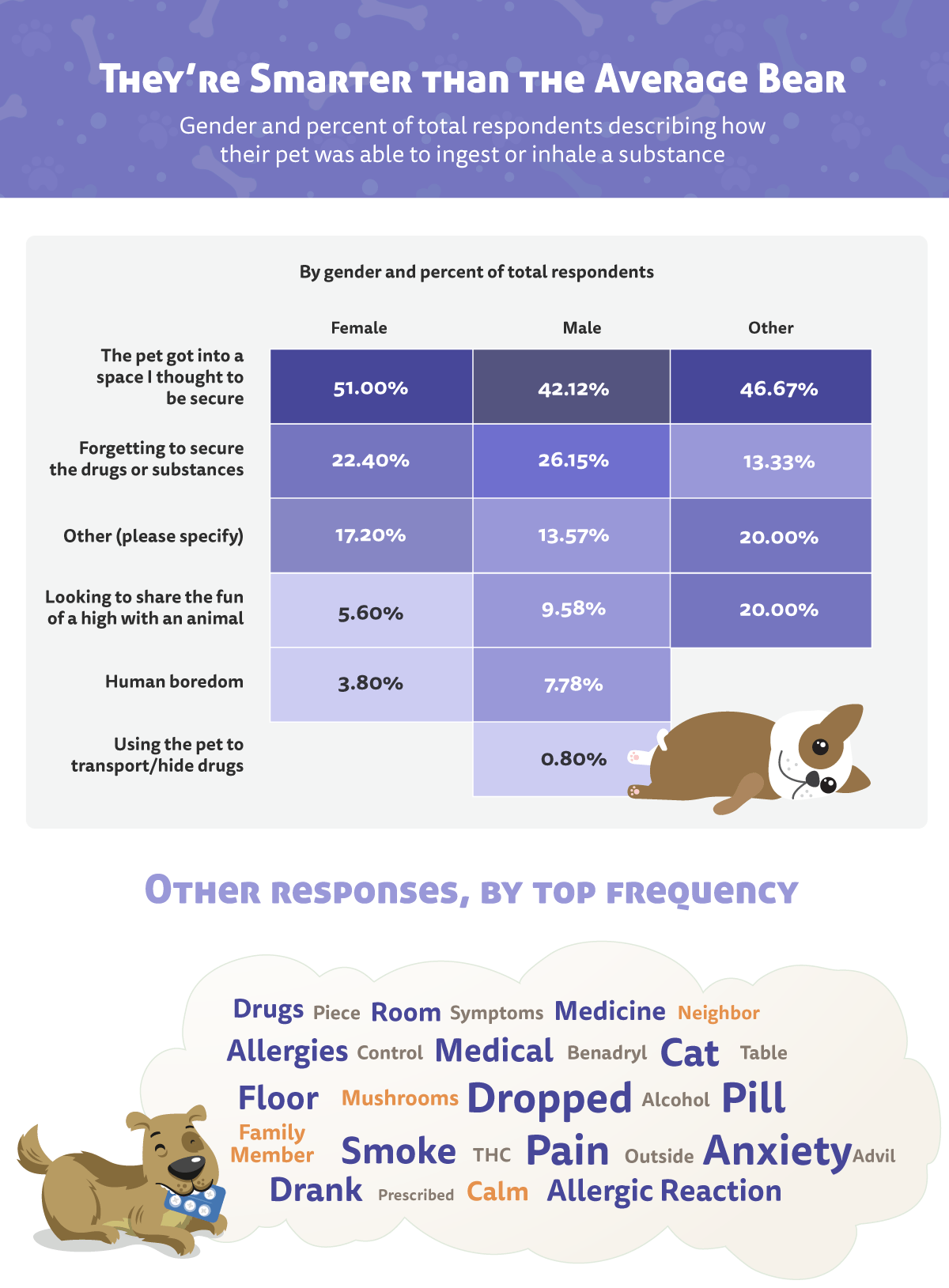 You know the way your dogs like to raid the trash? Or the fact that you can’t leave food out on the counter with your cats roaming around because they’ll be sure to find it? Despite how much we might love them, pets have a weird way of getting into (and sometimes eating) stuff they shouldn’t, no matter how hard we try to keep them from doing so. While these tasty inedibles can range from socks and toys to solid money, they can sometimes be much more dangerous.

More than half of women and over 42 percent of men said their pets managed to get these toxic substances out of a place they thought was secure. Another 1 in 5 women and 1 in 4 men admitted they forgot to secure their drugs or substances.

When asked to describe the scenario for other reasons of ingestion, the people we surveyed commonly used words including “dropped,” “reaction,” and “pain.”

Even if your pet isn’t exhibiting the physical symptoms of having accidentally ingested harmful substances like drugs or alcohol, hospitalization may still be the best course of action. If they aren’t trying to pass the substance themselves, a veterinarian might chose to medically induce vomiting to help relieve them of the effects.

If your pet isn’t stable at the time they are brought into an emergency clinic or hospital, inducing vomiting may not be an option, and more serious forms of treatment (including surgery or intravenous medication) may have to be considered. In some cases, it can take days or weeks for your pet to fully recover from ingesting these types of substances.

Not everyone we polled knew how to proceed or whom to call when they realized their pets had ingested drugs or alcohol. Of those who said they did nothing at all, more than half were men compared with roughly 2 in 5 who were women. Others opted to call a friend or family member or a hotline for advice. Women we surveyed were more likely to call an animal hospital or veterinarian while men opted for pet clinics or medical doctors.

There are various forms of animal cruelty and abuse, but typically the most common is neglect. Unfortunately, not every pet owner we polled was fully aware of the dangerous consequences of letting their pets ingest or inhale certain types of drugs or alcohol. Perhaps more worrying, several also confessed they didn’t really care.

Led by coastal states including California, Texas, Florida, and Washington state, a significant number of survey respondents refused to take action after learning their pets had consumed these potentially toxic substances. Americans we polled from states including Arizona, Montana, New York, and North Carolina had a similar response, but only failed to take action because they didn’t think medical care or treatment was necessary. Only participants from a few states (including North Dakota, South Dakota, and Arkansas) said they were more careful with their drugs or alcohol after seeing the impact they could have on their pets.

In Their Own Words 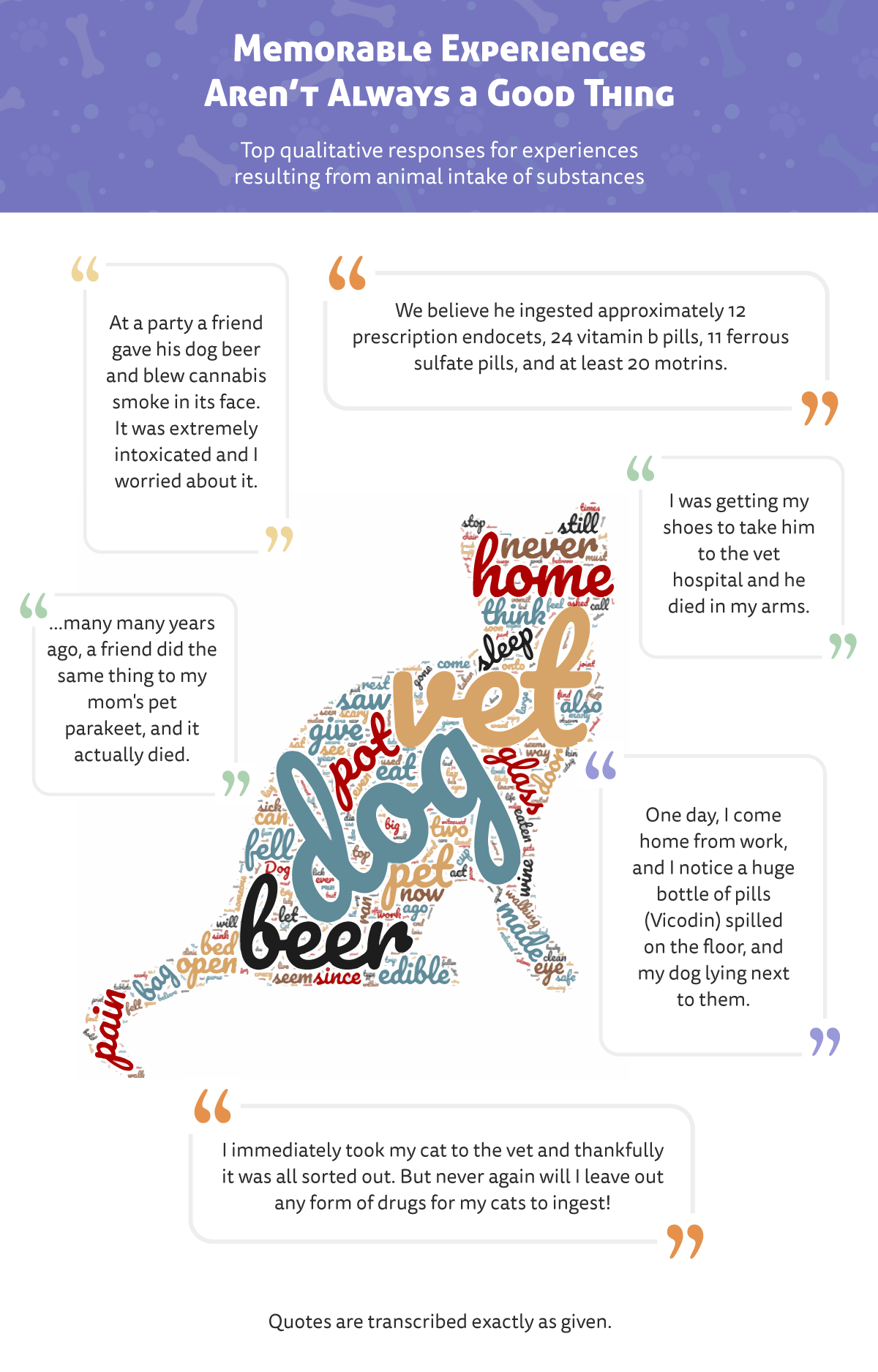 Here you can read some of the firsthand experiences recounted by people we surveyed after their pets either accidentally or deliberately consumed drugs or alcohol. In some cases, their stories help convey the danger and regret people felt after watching their pets suffer (and in some cases die) from the effects of these substances.

As one person told us, “At a party a friend gave his dog beer and blew cannabis smoke in its face. It was extremely intoxicated and I worried about it.” Another person shared another tragic turn of events saying, “I was getting my shoes to take him to the vet hospital and he died in my arms.”

Among all of their responses, we found the most common words used to describe their personal experiences were “dog,” “vet,” and “beer.” Still, we found other words including “pain,” “pot,” and “never” were also regularly used by people who’d seen pets ingest prescription drugs and other illicit substances.

The Dangers of Substance Abuse

Across the country, Americans are facing a new type of drug crisis. The number of people misusing opioids like heroin, fentanyl, and other prescription drugs continues to climb, resulting in record numbers of drug overdoses and deaths. In 2016 alone, approximately 64,000 Americans died from drug overdoses. This type of mainstream substance abuse effects more than just drug users: It can impact their friends, family, colleagues, and, as our study found, their pets. Over 1,000 people told us their stories watching pets consume these dangerous substances, whether due to accidental ingestion or deliberate feeding, and in some cases die from them.

When it comes to battling substance use and mental health disorders, we know the right course of treatment means one thing: working with a doctor. The Family Center For Recovery is the only facility in Florida owned and operated by a triple board certified addiction psychiatrist. We know the impact of these substances on the brain is complicated, and we believe cutting edge recovery is found in psychiatry. At the Family Center For Recovery, we work with family and loved ones as a unified team to help our patients achieve their goals and start living their best lives again. To learn more about treatment or our campus, visit us online today at FCFRMD.com.

All participants were screened using a two-pronged approach: (1) description of selection criteria with a requirement for self-acknowledgement and acceptance, and (2) directly asking each participant to confirm each criterion, namely (a) being a pet owner, and (b) witnessing their pet(s) ingest or inhale a “drug or substance.” The term “drug or substance” was defined as “any illicit or legal drug, including narcotics, alcohol, human prescription drugs, household/cleaning items with chemicals, and/or edibles containing any substances (illicit or otherwise).” A total of 1,348 attempts were made to take the online study, with 252 eliminated for: (1) not being a pet owner, (2) not witnessing a pet’s ingestion or inhalation as defined, (3) not completing the survey, or (4) a mixture of these. Additionally, 13 response sets were eliminated for having duplicate IP addresses, for a total of 265 eliminations, yielding a final completion rate of 80.34%, and a final n = 1,083. This study employed an online survey using a convenience sampling methodology via Amazon’s Mechanical Turk, with a subsequent posteriori exploratory, correlational data analysis methodology employed after completion of data scrubbing via Microsoft Excel and data visualization via Tableau.

Is TMS Therapy better for depression than ECT?
December 6, 2017